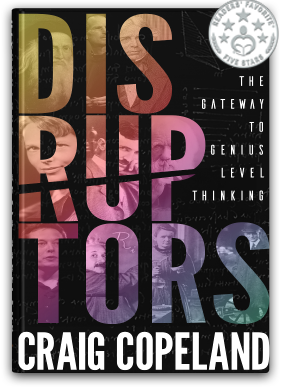 The most radically comprehensive book on divergent thinking for remapping your mindset.

Get Your Copy of Disruptors TODAY!

GENIUS IS NOT WHAT YOU THINK IT IS

Everyone strives to become more intelligent. We’ve been conditioned to believe that IQ is the ultimate source of genius. Yet those who have changed the world did so by cultivating a radically disruptive skillset that’s different from what is taught in school or measured by standardized intelligence tests.

Now you can learn to use the tools that geniuses throughout history have been using to create, inspire, design our direction, and determine our destiny. And the key to unlocking these powerful tools is as simple as turning a page.

Not a Book, but a Whole New Philosophy

Combining the revolutionary tools of intuition, vision, creativity, exploration, and discovery, Disruptors reveals 8 revolutionary attributes that remap and enhance the human condition. You will learn to bend reality, see the world in a new light, discover your true path, shape your destiny, and grow your intuitive creativity like never before. You’ll gain access to a simple step-by-step system using tools that will guide you to make your own dent in the universe.

To fully absorb the concept of Disruptivism, I’m going to ask you to use your imagination. Not in a fairytale, fantasy-like way but in a more divergent “think way, way beyond the box” style of imagining. To borrow a line from the 1983 film Wargames, “Shall we play a game?”

Imagine if you could create something new, something revolutionary that totally disrupted the way we think, act, and live simply from a thought or an idea you had?

And what if you could tap into this resource any time you desired?

Throughout history, there have been courageous men and women who, ignoring the conventional wisdom of society, ventured beyond, questioned, and pushed the boundaries of their fields and interests. It wasn’t that they were purposely pushing back against the status quo. Most were merely curious, wanting to stretch the boundaries of imagination and explore a new thought or idea to see where it took them. I call this pulling at a thread.

1. You’ll understand what Disruption really is, how it works, why the most radical thinking visionaries are able to think this way, and the reason why society teaches this out of us.

2. You’ll be introduced to the 8 most disruptive attributes and how one begins to adopt them into their own habits and practices.

3. You’ll read historical examples that illustrate how these radical thinkers were able to achieve such disruptive results and provide you with the tools to start your own disruptive journey

4. A set of new concepts will unfold to give you the opportunity and momentum to dramatically change your habits and default thinking style.

5. Additional practices will help you reprogram your thinking to use failure as a weapon for success, push beyond fear, and eliminate any cluttered thinking that can hold you back.

6. A simple step-by-step process that walks you through what it takes to think like an intuitive genius.

7. The key to breaking down walls and barriers that are both limiting and obsolete that we continue to cling to, replacing them with radically new skills and a mind mapping guide for disruptive thinking.

Everything you need is already within you. It won’t require years of training or reconditioning. Once you begin to see how simple and easy this process is, you can begin to incorporate the steps necessary to start your road to becoming a visionary mastermind.

Author of the Disruptors: The Gateway to Genius level Thinking. This latest book is based upon 14 years of research and interviews and packed full of radically new insights and super-methods for remapping how you think, act, and live, in a profoundly different and dynamically new way.

The  four ideas of this system are:

2: Try things that may not work

3: Never let others define your limits

4: Keep your ego in check